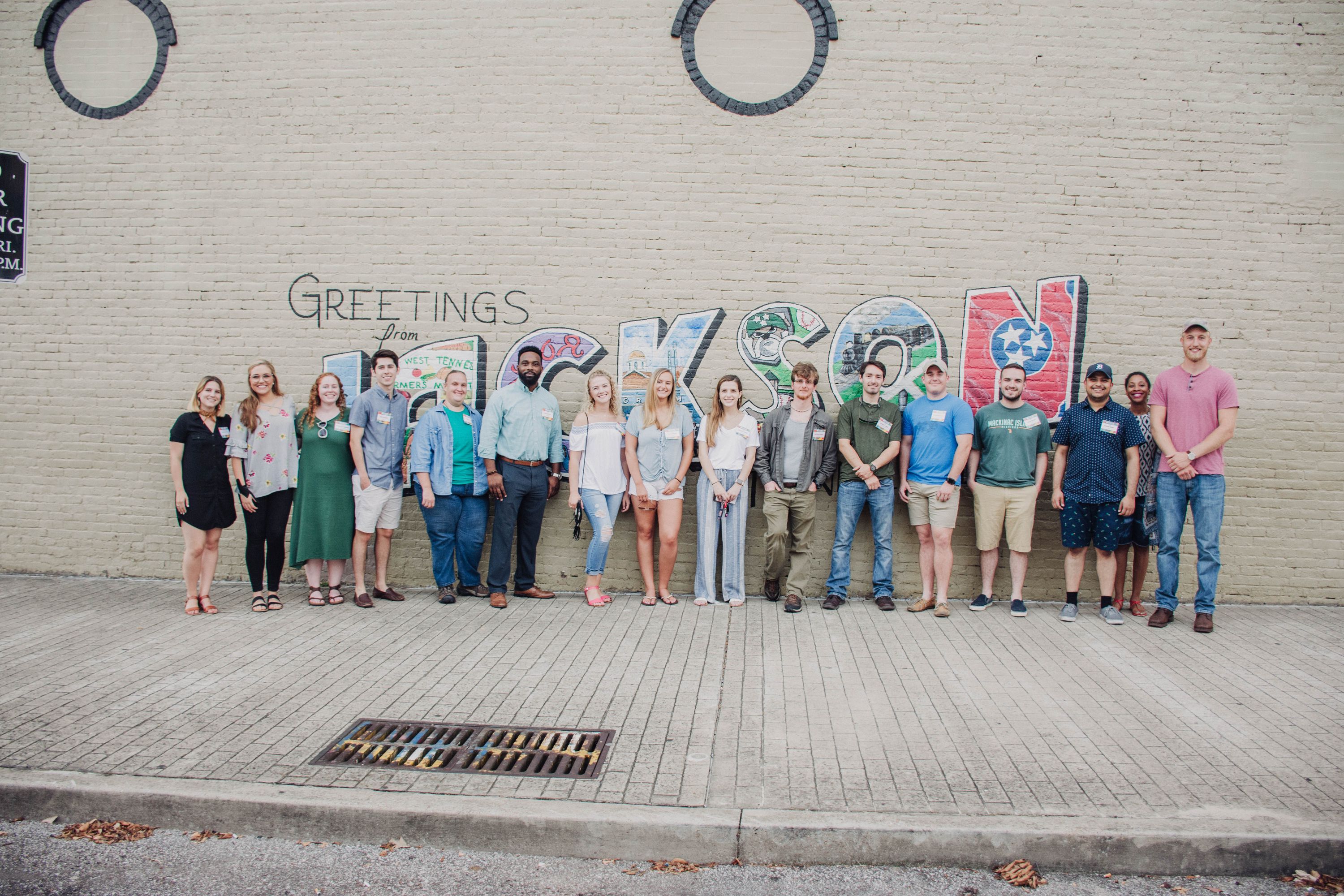 Downtown. The word itself implies there are other regions to the city it belongs to. When you think of famous downtowns, you probably picture New York, Chicago, Boston, or any city with a population in the millions. Perhaps, you remember the quaint little town you rolled through on a family vacation. The leaves were changing colors, the air was filled with crisp scents backed by a cool edge, your family never squabbled … Right, back to reality. You probably only stopped at the small town so someone could go “potty.” (I will proudly confess to being that person who stops approximately every two hours while on a road trip. No shame can be placed upon me because I am ignoring the hate of all “road conquerers.”) The reality is we all have an image that is conjured up in our mind’s eye when someone speaks of “downtown.”

I, personally, like to imagine downtown like a great cast iron skillet. (Unfurrow your brow and stop wondering what medication I am on. Just because I fight dragons in the kitchen doesn’t mean I am on medicine. I’m kidding, by the way, for anyone who was momentarily concerned about my sanity.) Why, you may ask, would any sane human being compare a downtown area to a skillet? And, not just any skillet! A cast iron skillet as all good southerners know is never washed. (Many a small southern child learned this when death was threatened them if they dared to wash their mother or grandmother’s best cornbread skillet.) Cast iron is seasoned. The seasoning process can vary from individual to individual; but, in my family, the seasoning was always performed with leftover bacon grease. (That is another capital offense in the south, the trashing of good bacon grease. Don’t ask. We apparently are prone to hoarding.) You slather the skillet with your oil of choice and cook the mess out of it. The seasoning sets the tone for how any item cooked in said skillet will turn out.

Downtown streets are the building blocks of any city and the seasoning base. They determine how a city will develop, who will call it home, and what industries will spring up. More importantly, a downtown city block will tell you about the culture of its city. Rarely do you find symphonies, ballet companies, art galleries, or theatre troops performing outside of a downtown community. When cities were being developed the arts meant something. The arts were esteemed and revered as signs of civility and culture. If your city possessed the arts, it possessed a part of the world. The arts took you outside of your city limits and into other societies. (Okay, enough grand thoughts for now.)

The spices that make up the seasoning of Jackson’s downtown are varied and wrought with years of history. We have blues and Rock-a-Billy music bringing the base heat, with hints of art, pottery, sculpture, and crafts tingling on your tongue. You will discover the sweet and salty of family-owned restaurants, revitalized warehouses, and business dancing through across your pallet. The flavor of downtown has deep southern notes which are being invigorated by the blossoming flavors of Nashville and Memphis. Their downtown vibes are encouraging and inspiring to Jacksonians who believe their city can be just a sweet and spicy as their “big sister” cities.

Jackson’s downtown has had its share of peaks and valleys over the years, including an F4 tornado; however, it always manages to survive the obstacles of time and change. In 2013, the landscape of downtown began to change drastically as apartments, a state-of-the-art gym, and local restaurants and shops opened their doors. Jacksonians began to see their downtown as a community worthy of planting roots. Young professionals and families moved out of their suburban neighborhoods and back onto the historical streets of Jackson.

It is this revitalized Jackson that Experience Jackson participants have been introduced to over the past few weeks. Most recently, they toured down Main Street stopping at the old City Hall, now the Ned McWherter Cultural Arts Center, for a sneak peek of The Jackson Theatre Guild’s performance of Mamma Mia!. The Jackson Theatre Guild produces four shows during the season and has been a part of the community’s arts culture since 1965. Their slogan is “Ordinary People, Extraordinary Shows,” and I can honestly say this is true. I have been blessed to participate in the Jackson Theatre Guild since 2009. (I may be biased, but you should make it a priority to see Mamma Mia! next weekend. Do it! Get off the couch and enjoy some culture.)

After our sneak peek, participants were able to hear from Jackson Arts Council Executive Director Melinda Hearn Reid. Melinda shared her passion for the arts and Jackson’s place in them. She enlightened participants where they can discover art, sculpture, music, and dance. With eyes open, we walked down to the Jackson mural outside ComeUnity Cafe for a quick photo stop. (I mean, can we humanly pass up the chance to take a picture in front of a mural anymore? I’m pretty sure there is something in the DNA of a millennial that will cause them to implode if they pass on a photo op. I have no scientific proof on this so don’t quote me.)

The last stop of the humid evening was Baker Bros. BBQ. We were treated to delicious barbeque and stellar music from Tyler Goodson. Between the food and music, I was in southern heaven. Drew Baker, owner of Baker Bros. BBQ, shared his heart on both food and downtown Jackson. “I grew up on this block,” said Baker. “My family’s history here goes back almost 90 years.” According to Baker, there is nowhere else he would rather be.

Participants also heard from Executive Director of Jackson Downtown Development Corporation Matt Altobell. “Downtown is the crossroads of Jackson,” shared Matt. He explained his heart for the development of a city that he never expected to call home. College drew Matt to Jackson, and the people called him to stay. “A downtown captures what a community feels about itself,” said Altobell. Clearly, Jackson is feeling worthy of growth and revitalization. We are not a perfect city with all aspects of physical and personal community figured out; but, I believe we are a city trying to move in one corporate direction.

I spent the majority of my childhood either at The Ned or The Civic Center performing in theatre and dance. Downtown was never an elusive mystery to me as it can be for some Jackson children. I knew it wasn’t perfect, but I saw its charm and allure hidden beneath the surface. It delights me to drive through and see it coming to life one building at a time. The “seasoning” of Jackson is reacquiring its full-body flavor one day at a time. If you have never spent much time in downtown, then this weekend is the time to start. Visit The Amp tonight for a free live concert. Bring a lawn chair, a pizza from Rock’n Dough, and relax the evening away. Then, start your Saturday morning at the farmer’s market perusing booths while you chow down on doughnuts the size of your face. (No hyperbole here. They are truly a work of fried dough art.) Downtown Jackson will show you a whole new side of the city you love. Take the weekend to taste the flavors of your city.

Mamma Mia! – July 18-21 – Tickets can be purchased at www.jtgonline.com