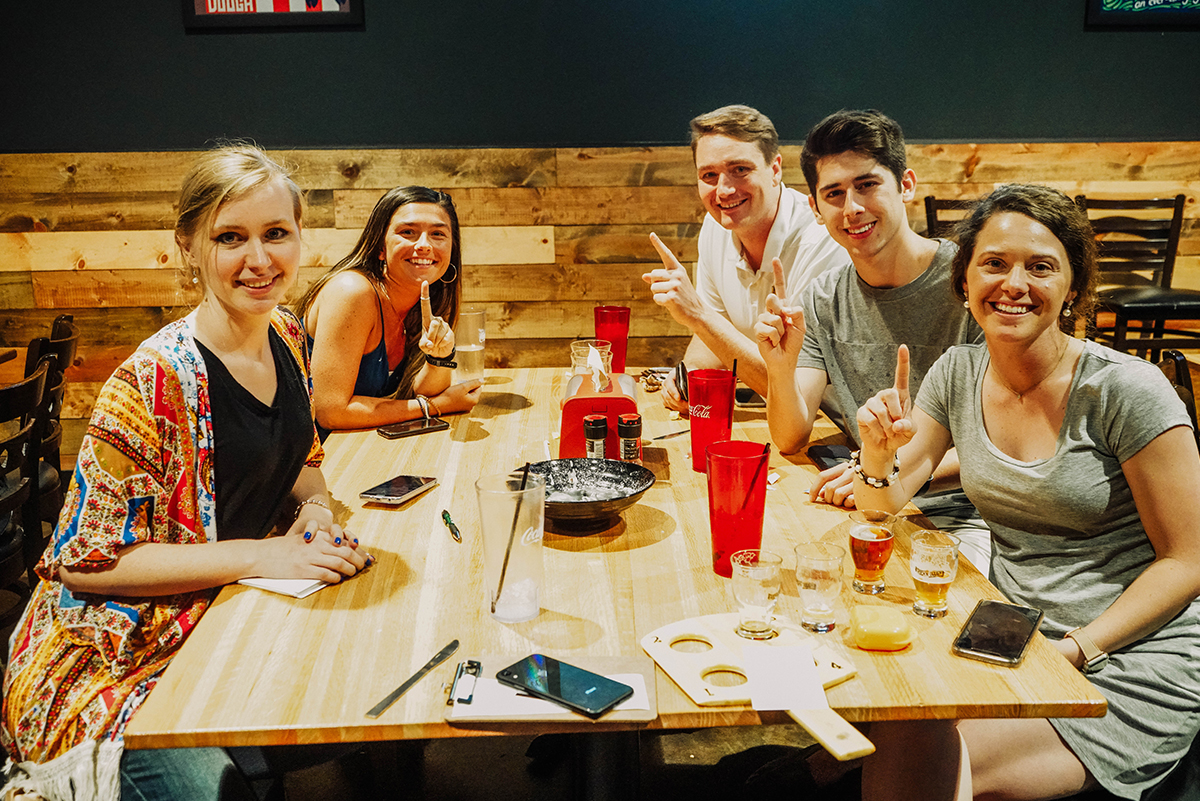 Becoming a Jacksonian does not have any special rites of passage, strange rituals, or mile marker moments. (Although, now I’m thinking it should. Perhaps, we could require new Jacksonians to take a quiz, or pledge their allegiance to the Hub City forever and always; but, I can see how this might deter a few people so we can just skip the initiation.) The one tradition that will inevitably occur for a new member to our city is the infamous “how did you end up here” conversation. We are curious about how anyone outside of West Tennessee found us. (I mean, when I lived 121 miles away in Nashville, I could still count on one hand how many hipsters knew where my hometown was located.) As much as we don’t want to be an unknown blip on I-40, we also want to be fully aware of who is moving into our community. We promise not to pester you or butt-in where we don’t belong – unless we are over the age of 50 and then we can’t help it. I can promise we will tell you where the nearest Kroger is, including the “new” Kroger which hasn’t been new for over a decade, and the best Starbucks out of the five we currently have. (Clearly, we have our priorities straight.)

After you have your refrigerator fully stocked and your caffeine addiction met, we will sit down and ask you again, “how did you end up here?” I’m always intrigued by the variety in origin tales when I ask this question. The most common answer I receive is family (whether it is biological or manmade). Funny, how the majority of our teen years we strive to get away from family, and then when reality sets in we long to be close to them. Community is what you find most in Jackson.

So far, Experience Jackson participants have been exposed to both the community and delicious food. This week we thought it was time to introduce them to a developing city and several non-native Jacksonians whose hearts are passionate for our city. We also thought it was time to test the participants’ trivia knowledge. The evening began with a tour of The LIFT downtown – the anchor point of The Jackson Walk development. The LIFT is a state-of-the-art gym owned by West Tennessee Healthcare. (A word to the wise, one of the best times to work out at The LIFT is in the morning. I loved hitting the treadmill at 6:30 am as the only member under the age of 60 currently working out. It was hard to be intimidated by Ira walking at a snail’s pace next to me. Ira, I mean that with great respect. However, make sure to take in a pair of sunglasses because the sunrise is fierce through the front windows. I may or may not have retinal damage. Ira, can you give me the number of your ophthalmologist? Thanks.)

I find it only appropriate our tour of the gym was immediately followed by a crash course in carbs at Rock’n Dough Pizza & Brewery. Participants stuffed their mouths with artisan pizzas and their brains with trivia knowledge.

Two of our Ambassadors for the evening were Adam and Beth Ann Simpson, Jackson transplants and proud members of the community. I had the honor of working with Beth Ann at The University of Memphis Lambuth where she serves as the Student Services Coordinator. Adam is a teacher at Early College High on top of being the head coach for Madison’s men’s’ basketball team. Adam and Beth Ann have two young children and are active members at Lambuth Memorial United Methodist Church. I sat down with them to have a quick one-on-one to pick their brains about how and why they have come to call Jackson home.

Keaghlan: Where are you guys originally from?

Beth Ann: I was born and raised in Oneonta, Alabama but my family moved right before high school to Shelbyville, Tennessee. My parents have moved back to Centerville, Tennessee where they are from originally. Adam is from Frankfort, Kentucky.

K: (Apparently, Adam’s story isn’t as interesting.) What first brought you to Jackson?

Adam: I transferred to play basketball at Lambuth University my senior year in college where I met Beth Ann.

BA: I moved to Jackson for college.

K: Why did you choose Lambuth?

BA: I had Methodist ties and really loved the look and feel of the campus.

A: I had the opportunity to play for a coach I had previously played for, and the campus had a great family atmosphere that was appealing.

K: What did you enjoy about Jackson as a college student?

BA: I loved the campus and the location between Memphis and Nashville. For a smaller town, it had more shopping and food options while still feeling like a small town.

K: What motivated you to remain in Jackson?

A: Actually, we both left the first year after we graduated. I decided to move back to Jackson to be closer to friends and because I had been offered a job here. Beth Ann moved back because she couldn’t live without me.

K:  So, you two actually fell into the trend so many post-college graduates in Jackson lean into – running away. I don’t say this to throw shade because I did the exact same thing. When you returned to Jackson, why did you choose to invest in the LANA area?

BA: We fell in love with the area while we were in college. We love the diversity of the neighborhoods as well as the opportunity to be a part of the community’s restoration through improving the neighborhood and loving its people.

K: It really is a community of people who are invested in Jackson. There have been a lot of community members who have invested over the years to Jackson’s growth. Specifically, where do you see growth in Jackson from your college days until now?

BA: There seems to be an influx of young professionals and young families who are supporting Jackson by staying instead of immediately moving to Memphis or Nashville like almost all of our college friends did.

A: I agree, I think a lot of that has to do with the fact that the growth of the downtown area has allowed young people to feel as if there are places to go and opportunities to be had.

K: I wholeheartedly agree. Jackson is growing at a steady secure rate and I think a lot of this growth is owed in part to the development of downtown. Young professionals and families are seeking out the feel of a Nashville or Memphis and are now finding some of that same vibe in their own backyards. As Jackson moves forward, where would you like to see growth?

A: I think we need to find ways to break down barriers that still divide our community. We need ways for people from diverse backgrounds to work together.

K: What excites you about being a Jacksonian?

A: We see a lot of potential in Jackson and feel it is moving in a great direction.

BA: I love seeing young professionals and families wanting to invest their time and energy into making Jackson a better home for every member of the community.

K: We have a lot of heart and passion in Jackson for Jackson which is so encouraging to see as you said. Speaking of passion for Jackson, you both work in the academic world here, what keeps you showing up every day?

BA: Honestly, I do it for the students and their stories. I am passionate about advocating for students who need to be heard and supported.

A: I love challenging my high school students to enjoy learning and growing as a human being. I get to be a part of providing Jackson teenagers with new options and opportunities to improve their future and play an active role in their own communities.

K: What would you say to someone considering moving to or staying in Jackson?

BA: To invest and love people! Jackson is a great combination of a small town with city amenities. In Jackson, you can not only be involved in your community but can feel the difference that impact is making on your city.

I cannot thank the Simpsons enough for their time and continued commitment to Jackson. It is moving to see two individuals with hearts that beat for a city and community they have adopted as their own. These are the people who make me proud to call Jackson home. They make this city better with every day they invest in it. Our hope is that Experience Jackson participants will be infused with the same passion to call Jackson home.

For more images, check out our Week 3 Gallery.